Following on from my previous blog about running in Delhi, I’ve also had the opportunity to briefly experience the cycling scene. Although running has a much larger audience, cycling is slowly creeping its way into the Indian market.

There are a few ‘cycling gangs’ in the city such as Delhi Cycling Club and Delhi Randonneurs along with some bike shops offering a good range of bicycles. The foundation in terms of equipment availability and services have been established – I even got my bike tuned up! 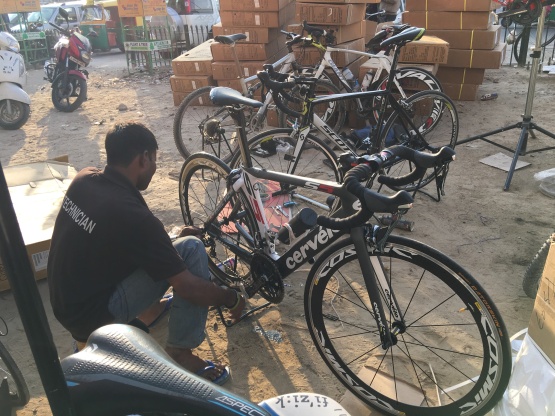 Unfortunately what is lacking is a safe environment and good road infrastructure which together in my opinion is the over-arching issue in hindering the growth of cycling in India. Poor traffic etiquette discourages people from getting out on their bikes for recreational or commuting purposes as they fear being knocked over by a rash motorist. With many potholes and grit on the roads, it is very difficult to find routes which won’t destroy your carbon bike!

By addressing the two issues above not only will it improve the conditions for cycling but also reduce traffic congestion and pollution which is currently a huge problem in India.

I knew I wasn’t going to get much cycling training done whilst on holiday but I nonetheless took my bike with me. Thankfully I had Arjun to accompany me and take me on a few cycling routes around the city. To my surprise, the routes were pretty decent. The road surfaces were in very good condition and the traffic wasn’t as life threatening as I thought it would be (although we were riding during the early hours of the morning when traffic volume is at its lowest). What was good about the roads was that the terrain was predominantly flat. If you were to push hard on the pedals, you could comfortably maintain about 40kph!

If I were to compare the road condition on the routes I rode on in Delhi to those that I’ve ridden on in Europe and the USA, I have to confess that the roads are better in Delhi!

Most the cyclists in Delhi start their rides around 7am purely to avoid the heavy morning traffic and get home in one piece! One of the downsides though is that it is usually necessary to drive to the start location with your bike since you can’t just simply ride to the start (again, you’ll probably encounter some poorly conditioned roads on your way). On the other hand if you get a puncture, you can simply grab an auto-rickshaw and make your way home safely without having to fork out a huge amount of cash! I remember when I began cycling many years ago in the UK, I got 3 punctures in one ride and therefore used up all my spare inner tubes. Since I had no more tubes to get back home I had to call a taxi and ended up paying a very hefty fare for the ride home 😦 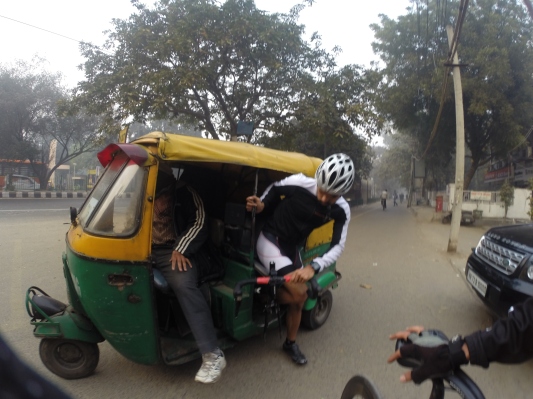 I’ve spoken a lot about heavy traffic in Delhi and the dangers of riding when it’s busy. I thought I’d show you what it’s really like by venturing out on my cousin’s heavy duty mountain bike and my GoPro and take some footage (please excuse my amateur video editing skills!).

I also made some new friends who I believe were under the legal age to be riding a moped and had one passenger too many! 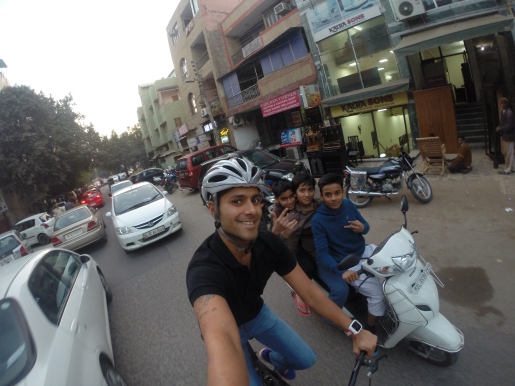 What does the future hold?

Having spoken to a number of cyclists in Delhi and Ahmedabad, I realised that there are plenty of cycling tours and races organised all over India. I am already planning my next trip to India where I’ll hopefully be riding on one of the cycling tours. I really do hope that the current growth in cycling does not reach a plateau. Cycling is a great way to commute and as a by-product, maintain healthy and fit! One thing is for sure though; the tradition of a post ride coffee and cake also exists in India! 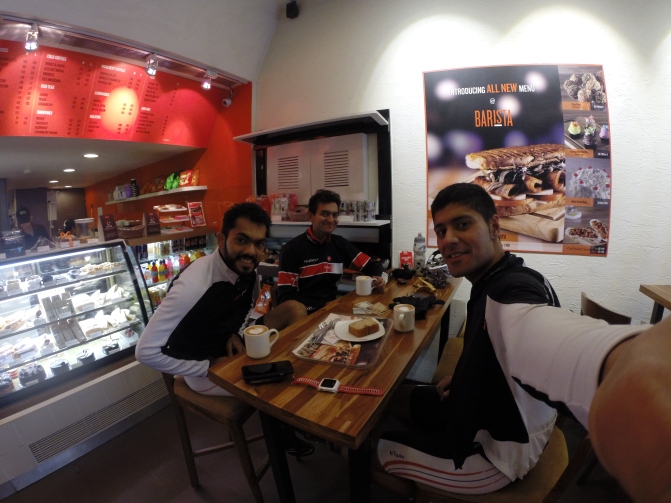